To celebrate the milestone of completing four exemplary decades in the fashion business, Italian clothing brand Diesel has released a new book titled ‘5D: Diesel, Dream, Disruption, Deviation, Denim.’ The book published by Rizzoli is an introspective and nostalgic walk through the last forty years of the iconic denim brand. Edited by Susie Lau – a fashion reporter and a key figure in shaping the global fashion industry – 5D explores Diesel’s history, legacy, disruptive power, and its rebellious image.

Filled with personal anecdotes of the founder Renzo Rosso & his team and vintage images, this piece of literary work aims at decoding what makes Diesel what it is – a cult favorite of fashion aficionados for over forty years. 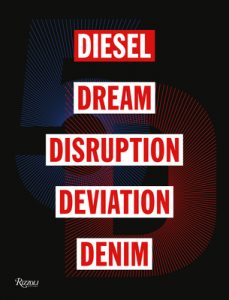 “I get emotional looking at the photos and thinking back on what we have done over the years. What makes me happiest is that the brand has kept its essence from the beginning… Diesel changed the way the world views denim,”

Rosso admitted while talking about the book.

To understand the weight of Rosso’s words, we’ll have to go back to Italy of the 70s where he stitched his first pair of jeans.

The Philosophy Of Uncompromising Spirit

The foundation of the denim brand’s true essence was laid in Rosso’s home in the early 70s. At the age of fifteen, he decided to stitch a low-rise bell-bottom jeans on his mother’s Singer sewing machine. His plan was to wear it and later sell each pair for ITL 3500 to his friends.This first piece ditched the usual aesthetics for men’s bottom-wear.

For instance, the standard 30-32 inch seam was replaced with 42 inches seam. It had an exposed zipper in place of an invisible zipper. And tapered fit made way for a flared silhouette.

Right from his first creation, Rosso showed his rebellious mindset (a quality that later became Diesel’s trademark), when it came to designs, shapes, patterns, and silhouettes. The Italian fashion entrepreneur went against the design basics he learned at the Marconi Technical Institute and carved his own path, Vogue reported. 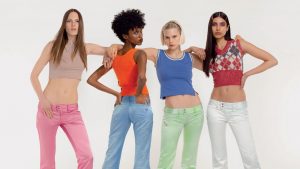 This was the designer’s first step towards changing the fashion industry’s and consumers’ whole outlook on denim as a fabric.

“In the 70s, it was a rebellion sign – a contrasting symbol between parents and sons. The adults wore pants with pleats while the teenagers wore skinny jeans. Denim was the sign of a social movement based on courage and freedom. That caught my attention and made me want to feel part of it.”

In 1976, Rosso joined Moltex, an Italian clothing manufacturing company owned by ‘the Godfather of denim’ Adriano Goldschmied. In just two years, Goldschmied offered a 40% stake of his company to Rosso, which led to the formation of Diesel. The year was 1978. By 1985, Rosso became the sole owner of Diesel.

The years spread across the 1980s were dedicated to experimenting with the denim fabric and infusing global elements that caught Rosso’s fancy during his travel sojourns. From patchwork jackets that represented the Venice Beach scene to the red, yellow, turquoise & violet jeans inspired by Mexican houses, from acid wash jeans to denim overalls, from baggy to skinny fit, the brand fearlessly celebrated denim in all forms, shapes, colors, and sizes. This uncompromising spirit enabled it to become the next status symbol and by the 90s, the Wall Street Journal crowned Diesel ‘the label of the moment’.

The Secret To Successful Living

The Italian fashion label became the ‘label of the moment’ and continues to be one of the most relevant brands by focussing on creating unique shopping experiences. Diesel was always more than a luxury denim clothing company. It was (and is) a lifestyle and an attitude with a distinct living personality. The brand not only poured resources into infusing personality in the fabric but also spent capital on creating a different identity through its physical stores and advertising.

This is the reason why it quickly became an aspirational brand.  In 1998, the Wall Street Journal described one of its stores,

“For these teens, Diesel is the label of the moment — unpredictable, irreverent, rebellious. A visit to the Diesel store near Chicago’s Magnificent Mile one recent evening finds it offering purchasers a bottle of Jones soda, a trendy Canadian brand. A disk jockey is playing alternative music. Diesel sells the occasional CD it considers cutting edge, such as a current “trip-hop” album by a band called UNKLE.”

Their 15,000 square-foot Manhattan store too had a similar vibe. Rosso shared how back in 1996 when they didn’t have enough products to fill up the huge store, they built a bar and DJ booth. And how during the initial few months, the store would transform into a party place after 6 pm! 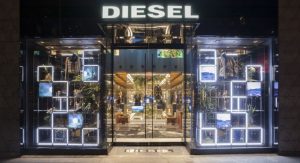 This distinctive perspective spilled over to Diesel’s marketing campaigns as well. Their ads are bold, provocative, and deep, which are presented with typical tongue-in-cheek humor. In the 90s, the premium denim label was famously known for its campaigns that featured everything but their apparel. Diesel’s campaign,

in Rosso’s words – is one of the longest-running and most successful campaigns. Naysayers warned the brand by saying that its young target market doesn’t care about serious issues. But Diesel took the risk by taking the road less traveled and it paid off. It revolutionized how brands interacted with the young generation.

“We believe that young people, like everybody else, are interested in politics, in life, in discussing things – so we challenged people’s minds. What we made was provocative, funny, but also intellectual – we more or less tried to pick up on the conversation that was going on in society around us and make art of it. We knew that we were right, but in those days it was a risk… I think in terms of advertising, it changed the ways you can communicate with younger people,”

shared creative director Jocke Jonason who worked on these campaigns.

In The Forefront Of Change

Be it differentiating its collection, stores or ad campaigns, Diesel stays ahead of the curve by studying the market and being tuned in to the needs of its buyers. This philosophy hasn’t changed in the last forty years.

While the 80s and 90s chronicled the rise of Diesel as an apparel brand, the decade starting from the year 2000 was dominated by strategic acquisitions. With a net worth of over $3 billion, Rosso founded Only The Brave (OTB) in 2002 and brought Diesel and the other acquired companies under it. OTB is now home to French luxury house Maison Margiela, Avant-garde label Viktor & Rolf, Italian label Marni, and manufacturing company Staff International. The holding company also founded Brave Kid, a venture that handles worldwide production and distribution license agreement of children’s wear brands such as John Galliano, Dsquared2, and Trussardi.

In its next phase of growth, the luxury label is expanding its brand presence by connecting with the new-age buyers – the Gen Y and Z.

Take, for instance, the fashion house launched ‘The Diesel Red Tag’ project in 2018 that supports young designers. In the last two years, the fashion house has collaborated with Samuel Ross, Shayne Oliver, Glenn Martens, and Gosha Rubchinskiy. Diesel’s Red Tag partner for 2020 is Japan-based upcycling brand Readymade by Yuta Hosokawa. Under this partnership, upcycled Diesel denim would be used to create a genderless collection. 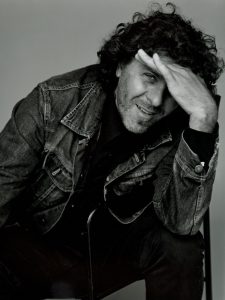 The cross-functional collaborations with companies like Coca-Cola and Samsonite reflect the label’s commitment to building a meaningful brand that strongly resonates with the empowered generation. While the collection with the soft drink brand addresses the need for recycling, the alliance with the luggage retailer tackles the issue of privacy in the digital age.

“As a leading pioneer in denim and casual fashion, DIESEL has always been known in the industry as an innovator. The (Re)Collection is a collaboration between two authentic and iconic brands that are both committed to more responsible business. Inspired by our vision of the future, we are collaborating with Coca-Cola to explore new methods of creating fabrics, whilst challenging ourselves to incorporate recycled materials in our collections,”

asserted Rosso, while talking about his company’s venture with Coca-Cola. While Diesel’s efforts to go green and keep abreast of the digital age issues are on in full swing, the company continues to experiment with denim fabric on the other end.

The brand introduced ‘velvet denim’ for its Fall 2019 collection. It blends the resilience of denim with the soft richness of velvet. Another hybrid innovation from the house of Diesel is their JoggJeans range that pairs ‘the look of denim and the feel of jersey’.

In the 90s, Rosso and his team at Diesel recognized that young people care about politics & economy and as a result became one of the rare brands that demonstrated respect in their brand messaging. In 2019, the brand recognized that young people care about the environment, their privacy and comfort, which resulted in alliances that are innovative and progressive. What has remained constant over the four decades is the label’s approach and connect with the buyers. Therefore, it comes as no surprise that Diesel has aged remarkably, like a fine piece of sturdy denim with its distinct markings, attitude, and personality without losing its core identity and strength.